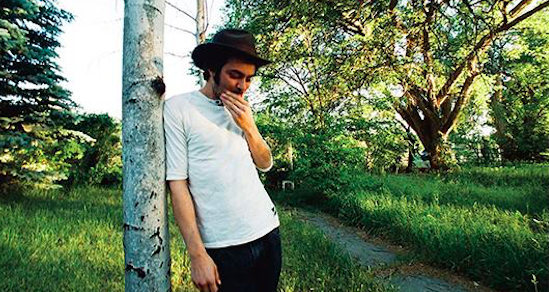 “I’m a working-class singer/songwriter who is pretty much always on tour, always writing, and looking towards the next thing,” says Max Gomez, the youngest of five boys from a Taos, New Mexico-based family. “One of my older brothers played guitar, and he was the guy in the family who always stop the show, the coolest brother I had.” Soon, nine year old Max was playing more guitar than his cool older brother.

Admittedly, Gomez’ parents didn’t listen to much music, but he distinctly remembers two cassettes on repeat in the family vehicles during his 90s-era childhood—John Prine’s The Missing Years, and a record by Neil Young. “John Prine’s record made a big impact on me, I knew all the songs. Years later, I heard it again, and it reawakened something,” he recalls. “I also had a brother who was into the blues. We thought B.B. King hung the moon.”

Gomez quickly decided that music was his life’s path. “I was trying to figure out how to make a living, and there were musicians in my hometown in Taos. There was a regional country music star I used to play shows with, and he didn’t have any money. Then, there was a songwriter who lived in the area, and he had lots of money. i figured maybe you had to write songs to make a little scratch,” he says with a laugh. “No one really taught me, I just sort of figured it out on my own. I moved to California after high school to figure out music. My family helped support me for about a year, and then I was on my own living in Hollywood and trying to go to school,” he adds. “It took me two or three years to figure out how to make music for a living, and I’ve been doing it ever since.”

“Everyone in L.A. was trying to be a celebrity, and I never set out to do that,” he continues. “What I wanted to do was make music and be able to do it professionally. I had a more realistic approach to it than the folks around me. I tried to study, call people who made the records I looked up to,” he explains. “I learned that it’s a long path, not a bottle rocket that flies in the air and explodes.” Though was making his way through the Los Angeles scene, he kept the home fires burning in his high desert hometown; Gomez traveled back for a string of shows, and ended up staying. “Three shows turned into 20, and the next thing I knew I was doing well performing back home. I eventually started venturing to New York to make records,” he says. “But my clothes and my guitars live in Taos.”

Recently, Gomez released a new EP Me & Joe, via Brigadoon Records, recorded in California with producer Jim Scott, who has worked with bands like Wilco, Tom Petty, and Ryan Adams. “It seemed too good to be true,” he recalls. “I talked to Jim about recording, and he said we could whatever we wanted. He’s a master, and he had me at ‘hello.’ It excited me to make an old-fashioned record live, and we made a great one,” he says. “I’m really proud of it.”