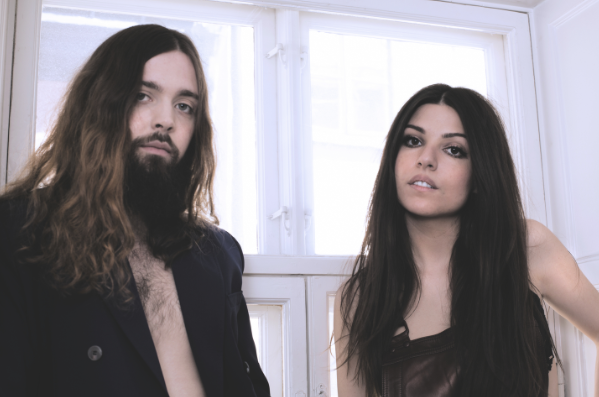 The story of Flora Cash is the epitome of the 21st century romance.  Songwriter Cole Randall and alt-electronic songstress Shpresa Lleshaj met each other, of all places, on Soundcloud.  “I was looking for something new to listen to; I found Cole and clicked on his music, and I fell in love with his voice and his lyrics right away,” Shpresa recalls.  “She commented on a few of my songs, so I looked her up and checked out her music, and I really connected with it and with her voice.  It was love at first listen, even though neither of us would have totally admitted that,” adds Cole with a laugh.  “We became Facebook friends, and short messages turned into long letters, which took forever because I had to write them in English!” says Shpresa.  Why? Because this story gets even better—Cole lived in Minnesota, and Shpresa lived in Sweden.

After time spent over marathon-length Skype calls, the pair decided to meet in person and write music during an entire summer spent together—which culminated in only one song, “Summerset”.  “It’s one thing to connect and have deep conversations, but we weren’t prepared for the vulnerability it takes to create songs together.  We both thought that the other was a genius and we were basically afraid to suck in front of each other,” laughs Cole. “That first song we wrote together, “Summerset”, captures the emotion from that time together.”

Eventually, they married, and formed their band, the indie-folk flavored Flora Cash.  Shpresa is the yin to Cole’s yang, their life together and musical partnership a glorious balancing act.  “Obviously, it can be hard, sometimes our opinions really differ. It’s magical, it’s loving, it’s stressful, and it’s crazy,” she says.  “Sometimes I want to kill him, but I always love him. We get to do the thing we love most in life with the one we love the most.”  “To be honest, it’s what I always wanted, to find somebody that is as passionate about pursuing music as I am; to find someone you connect with as a person and can connect with musically, it’s amazing,” adds Cole.  “A lot of people can’t imagine working with their significant other, but for us, we’ve gotten so comfortable with it, we’re really grateful we can share something we love so much and do it together.”

This heavenly match made, well, in the Cloud, definitely informs and comes across in the music they create.  On March 18th, Flora Cash released what they call a mini-album, Can Summer Last Forever?, via Stockholm label Icons Creating Evil Art, a lush 7-song walk on a rug made of the softest fur you’ve ever felt in the most magical house ever constructed under the starriest sky you’ve ever seen.

Flora Cash splits their time between Stockholm and the States, and have amassed a loyal following of devoted listeners.  “A lot of people write to us and tell us ‘my girlfriend and I shared our first kiss while we were listening to your music’ or ‘I listened to your music and it made me feel better.’  Our music means different things to me at different times, and I hope it affects a lot of people in different, but positive ways,” says Shpresa. “To have our music associated with these big moments in people’s lives, that’s the best.”