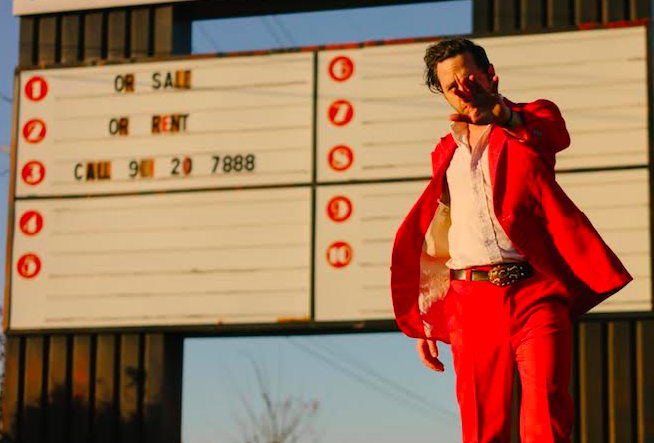 Known as a bass-toting sideman for artists like Jonny Fritz and Andrew Combs, Jackson, Tennessee’s own The Kernal is headed to center stage with the release of his forthcoming debut, Light Country, out on John Paul White’s own Single Lock Records on March 3rd. “I’ve been waiting to put this out for a while, and I’ve been touring,” he explains. “Sometimes I feel like I’m shooting myself in the foot living in Jackson, but that also makes it kind of fun, having to go from the ground up and figure everything out without hobnobbing and hanging out with the folks in Nashville all the time. You end up playing some really weird places in Mississippi,” he laughs. “I’m excited to get it out and see if anybody likes it!”

His father, a touring musician who backed Del Reeves at the Opry on the weekends, taught him to play guitar, and the red suit he wears on the album cover at his shows belonged to his father, a tribute of sorts. “I’ve worn that suit for every Kernal show I could. I did rip it a few times, and it was out of commish. The whole impetus for this project was that suit. It’s a gimmicky thing, and now I feel inextricably tied to it,” he laughs. “It feels good to put something on to go on stage, then when you get off the stage, you take it off, and it kind of helps with balance.”

To adequately capture the spirit and wit of his 60s/70s-inspired country flavor, The Kernal was thrilled to work with the Florence, Alabama-based Single Lock team, ; “Our relationship has been so symbiotic,” he reveals. “It’s professional enough that you have access to things, but small enough that if you have a weird idea—I’ve had some harebrained ones—they are so accommodating.”

“To me, Light Country is meant to be a genre—like ‘What kinda music you playin’ Kernal?’ Light country. It’s like diet country,” he laughs. “I loved it when Jonny Fritz did the ‘dad country’ thing and how Sturgill Simpson had the metamodern thing. I wanted to have a genre!” he declares. “I was trying to find my voice, and giving myself enough room to do that without trying to copy everyone else.”

“It’s very tied into the era we’re living in, ‘liquid modernity’ in all its globalized splendor,” he continues of the idea of “light country.” “You’re in 2017 and you think country music is so cool and it’s a part of your heritage, what do you do with it? For a lot of folks, it’s repeating other things and putting a twang in their voices, wearing the right clothes, and all of that stuff,” he says. “For me, it’s taking inventory of what I like, what’s important to me, and reflecting it in the stuff I put out.”