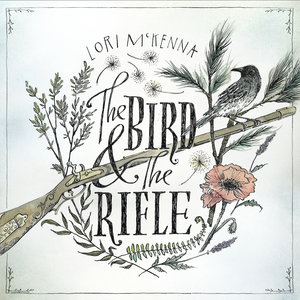 Her newest album, The Bird & The Rifle, out July 29th via CN Records and distributed by Thirty Tigers, houses ten unassumingly brilliant songs brought to life by producer Dave Cobb and is irrefutable proof of her creative power.

McKenna explores how the pursuit of a career can affect the loved ones left behind in “Wreck You”; the album’s title track, whose name was interestingly inspired by a character’s line in the television show “Modern Family”, examines an unbalanced and dangerous relationship between a lonely woman (“the bird”) and a neglectful man (“the rifle”). She delves into the lyrically clever metaphor consistently throughout, painting the bird as a daydreamer who wants to spread her wings, a fact which brings the “rifle” out in the man, who fears her flight will not bring her back to him. McKenna sings of giving up on her hometown, of feeling used but still settling for less, of being weary of games lovers play. She implores us to stay humble and be kind in the aptly-titled “Humble & Kind”, a gracefully-delivered letter of advice written to her children, but which couldn’t be more timely given the troubled state of our society.

“Old Men Young Women”, another fine example of her writing prowess, examines a well-known relational dance—“Old men, young women/Only work in the beginning/She’s the past in a summer dress/He’s a ride in a red Corvette/She’s a prize he’s winning/She thinks it is what it isn’t”. The lyrics viscerally skewer the clichéd pairing, but McKenna delivers them in a tenderly honest way that never seems preachy. She writes and sings of situations we all encounter, opening each subject like a book, inviting us to explore with her. In fact, each of her songs is a skillfully-crafted snapshot of how she views life. McKenna calls it like she sees it, and she’s spot on.