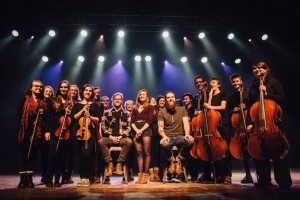 Boston-based heartwarming folk n’ rollers The Ballroom Thieves have teamed up with The Maine Youth Rock Orchestra for a ground-breaking collaboration that is, in a word, unbelievable.

“We’re a program offered by a non-profit rock school here in Portland called the Maine Academy of Modern Music,” explains Kevin Oates, founder and director of MYRO.  “I’m from upstate New York, but I did my undergrad here in Portland.   I moved back to New York after college, but I missed Portland, and I wanted to come back here and be an educator.  I’m an active classical musician, I record with bands and artists, play shows, go on tour, I’ve done all that, and I wanted to give those opportunities I had to students, to play on major stages with major artists.  The Youth Orchestra had its first ever rehearsal in February 2014, so it’s still a baby.  We’ve worked with artists in all kinds of genres; Oates hopes to show the kids that they can transform themselves and find their own individual voices with a classical skill set.  Auditions are held every June.  We expect high caliber musicianship, serving students ages 12-18, from 14 schools in 9 districts.”

When it came to working with The Ballroom Thieves, Oates says, “I immediately fell in love with them.  I walked up to them after a show in Portland and asked if they’d be interested in doing a workshop at some point, and it turned into two concerts, a music video, a tour, and an EP. “

“We were living living in Portland for a little while, we played there several times a year,” explains Thieves 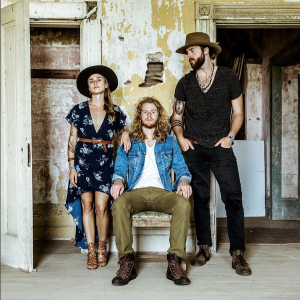 guitarist Martin Earley.  “We met Kevin, who approached us, told us about the orchestra idea, and we were like ‘where can we sign up?’  We had already started doing some things with elementary schools across the country; whenever we have time while we’re touring, we try to go to different schools and do programs. We’d also had a dream to play our music backed by an orchestra.  When those two things come together in that form, we couldn’t say yes fast enough.”

Oates works with the artists to choose songs that would be appropriate for the setting, and then he writes the orchestra parts to each one chosen.  “Writing parts for The Ballroom Thieves’ collaboration was actually challenging, because they do a phenomenal job creating so much sound for only three people, and their songs are so well-written,” he admits.  “The students fell in love with The Ballroom Thieves, it’s hard not to.”

The group finished the EP collaboration with MYRO not too long ago, and there is a national tour to follow.  “This is the first time they’re taking the whole orchestra on the road,” says Earley. “We’re really excited to be a part of it. We have a few dates in April with them, which will be a lot of fun, and probably a logistical nightmare.  I’m glad I won’t be responsible for chaperoning a group of 25 high-schoolers!  I don’t envy that job, I’m sure Kevin will gain some new gray hairs.  I think it’s such a cool experience though, not only for us, but for the kids.  When I was in high school, I was in the orchestra, and I would’ve jumped at the chance to go on tour with a band.”

For most of the shows, The Ballroom Thieves will play a majority of their set with the orchestra, and the trio will also perform a portion of the show, on their own.  “It’s going to be quite a haul, we’re reaching out to donors and are trying to make it as financially viable as possible, taking 25 students on tour along with 10 chaperones.  We’re looking at doing a documentary of the process as well.  We want to document this experience, because it’s really the first time a youth orchestra has gone on a national tour with a band.  We’re breaking new ground.  We have a wonderful parent group, they’re excited to go and have their children involved in this opportunity,” explains Oates.  “It’s a once in a lifetime experience.”   Adds Earley, “It’s such a dream to be able to do this, and we get to show the people outside of Maine what these kids can do.”

To learn more about the Maine Youth Orchestra and support their work, visit: http://www.maineyouthrockorchestra.org

2 thoughts on “Interview: The Ballroom Thieves and The Maine Youth Rock Orchestra”