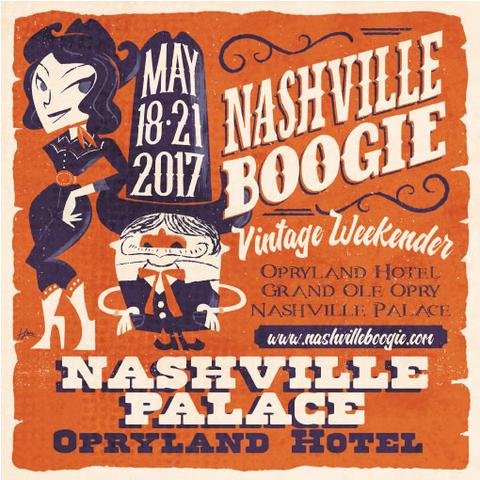 Upon entering the Grand Ole Opry, the crowd was met with the sounds of The Cowpokes, who set the mood early with a traditional honky-tonk twang filled set. With a mix of Boogie attendees and country music fans getting in on the action, anticipation was in the air for a night of country legends. The show was split into two distinct showcases–the first, rockabilly, the second, traditional country music with Bobby Bare and Jerry Jeff Walker.  For the rockabilly showcase, Deke Dickerson added star power to his set with legendary Sun Records session drummer J.M. Van Eaton, whose drumming was featured on albums from Jerry Lee Lewis, Johnny Cash, and Roy Orbison. All of the original album versions of the songs in the showcase included Van Eaton’s drum work. It was a touching tribute to a musician that was at the heart of so many classics.

Fittingly, Dickerson kicked the show off with Jerry Lee Lewis’s “Let the Good Times Roll,” reminding everyone that it was indeed a party. Dickerson used the time to highlight several of the artists–old and new– that had graced the Nashville Boogie stages.  After tearing through a couple more classics, Dickerson invited Harmonica Sam to the stage. Earlier in the weekend, the Boogie had featured “The Country Side of Harmonica Sam,” which was designed around Sam’s recent old-school country style album. “You may be asking yourselves why he’s called Harmonica Sam,” Dickerson prefaced. Sam is a well-known blues harmonica player from Sweden and Dickerson’s next song featured Sam’s dazzling harmonica chops. Being a gracious host, Dickerson refused to let Sam leave the famous Opry Circle without showing off his voice. Taking full advantage of the opportunity, Sam crooned the classic “Coffee and Cigarette Blues,” proving that the future of traditional country music is in good hands.

After a couple more solos, Dickerson ceded the Circle’s spotlight to the legendary Billy Harlan. Performing at the Opry had been a lifelong dream for Harlan, and he used his time to the fullest. After several years away from the music scene, Harlan has made a recent splash with his newest work, “I Ain’t Elvis,” which was his opening song. His time on the Opry stage was deeply sentimental as he also serenaded his wife with her favorite song, “My Fate Is In Your Hands,” and dedicated his classic, “I Wanna Bop,” to his granddaughter. Clearly, Harlan was touched by his inclusion in the showcase.

In breaks between songs, Dickerson often joked about the irony of a rockabilly show taking place in the hallowed halls of the Opry, sure that the ghost of Roy Acuff was watching with displeasure. “Of course, now every country band has its own rapper,” he quipped about the evolution of the genre. Before closing out the rockabilly showcase, Dickerson welcomed Big Sandy to the stage. On Friday, the Boogie Weekender included “The Country Side of Big Sandy,” which had featured traditional pedal steel driven honky-tonk sounds. For the Opry show, Big Sandy returned to his rockabilly roots, and after seeing both shows, I had a new appreciation for his range as an artist.  Sandy’s voice is a throwback to the original rockabilly stars and it shone while paying tribute to the classics. He led a special collaboration of “Great Balls of Fire” with Dickerson, sparking the audience to clap along, and inspired dancing in the aisles. No one can deny that the rockabilly torch is being passed to some fine champions that will keep flames of the genre alight for years to come.

With only a brief pause to change some instruments, the night shifted from the bopping sounds of rockabilly to a showcase of storytelling, yearning pedal steel, heartache, and good-old-fashioned country music. The Opry stage always features the cream of the crop, and the Boogie afterparty was no exception. From up-and- comers to bona fide legends, there was undeniable talent on full display.

It has been hard to miss all of the buzz around Nashville’s J.P. Harris. It was instantly clear that Harris’s old time country sound, thoughtful lyrics, and humble delivery were right at home in the Opry Circle. Supporting Harris was another fantastic rising artist, Kristina Murray. Harris’s set featured several of his original songs that had a delightfully throwback feel. Last year, he recorded an album featuring rising female country artists, which included Murray; Harris and Murray’s take on George and Tammy’s “Golden Ring” was a standout crowd pleaser.  After seeing him at the Opry show, I must add his name to any discussion about what is real country music.

Another local artist who has been getting attention is Josh Headly. With the lights set low, Headly featured several songs that will be on his soon to be recorded first album. With picked guitar, yearning peddle steel, and a voice made to sing about heartache, Headly proved to be a slow-dance song master.

The stage was now set for the first of two legends of country music, Bobby Bare.  It’s near impossible to enter a honky-tonk on Lower Broadway without hearing at least one of Bare’s songs. Performing with a full band and with a tremendous group of supporting fans, Bare thrilled the Opry house with classic hits, a few tall tales, and a bit of the history behind his songs.

With so many genre-defining hits under his belt, it’s hard to hit on all of the highlights of Bare’s set. There was the moment the entire crowd was locked in with one of the greatest country songs of all time, “The Streets of Baltimore.” There was when Bare gave us some of the behind the scenes details of his classic cheating song, “Lincoln Park Inn” (and he protected the name of the accused); or maybe it was his fiery, almost outlaw, version of “Marie Laveau” that closed out his set. Bare’s songs are essentials of country music and he sings them with a pride and clarity that lets you appreciate them as works of art. With a lengthy standing ovation, the Opry crowd showed how much they were touched by his iconic performance.

With only one artist remaining in the Opry showcase, I found myself torn between the downside of the Nashville Boogie weekend coming to a close and the anticipation of seeing the legendary Jerry Jeff Walker. I didn’t have long to ponder that dilemma as I was quickly swept up in the storytelling magic that is Jerry Jeff.

The expectant crowd didn’t have to wait long for Jerry Jeff to hit his most iconic song, “Mr. Bojangles.” He was only a few songs into the set when he said he wanted to sing a song for us while his voice was still at its best. With gently strummed guitar and perfect inflection, he spun the New Orleans lyrical tale as the Opry crowd watched on in awe.  I had been witness to many amazing shows at the Nashville Boogie that weekend, but this was one of those take your breath moments–I was watching musical history come to life.

Showing his sentimental side, Jerry Jeff carved out a section of his show to remember Guy Clark through stories and song. From “L.A. Freeway” to “The Cape” to “My Favorite Picture of You,” he honored the memory of a legend that was loved by so many of his fellow artists. Much of Jerry Jeff’s show was in fact sentimental, whether it was stories from his lengthy and happy time married, to his touching song “Little Bird,” which was part of his encore—but, many of the best moments came when he was being an outlaw and firing up the crowd with his rowdier pieces. “Up Against the Wall Redneck Mother” turned into a fist pumping singalong. “Trashy Women” has always been a dirty-secret favorite of mine and his classic version got the crowd moving. His encore closing version of “London Homesick Blues” was a clear example of why he is being embraced in the outlaw circles of country music.

Whether singing about love, raising hell, or spinning a yarn, Jerry Jeff is a storyteller through and through.  Near the end of the show, I thought to myself that any aspiring songwriter should spend some time watching one of his shows as he’s remarkable with the craft.  At the Opry for the Nashville Boogie afterparty, Jerry Jeff put on a show befitting his legendary status as a country music master, and put the perfect finishing touch on an unforgettable weekend.