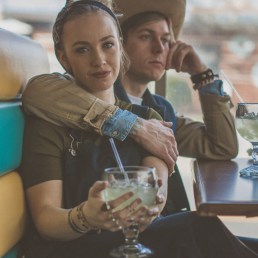 Josh Bohannon, born and raised on country music in a Georgia map dot, was more afraid to stay in his small hometown than he was to leave—and leave he did, choosing the polar opposite setting to pursue his musical dreams. “I moved to Los Angeles to do rock music, was in rock bands, metal as well,” he recalls. An opportunity arose to move to Nashville with a band for a year–and only a year–so he took it. “When I got here, the band broke up almost immediately. I was like, ‘Well, I’m going to be here for another 11 months, I might as well make the best of it,” he says. Josh started going to writers’ rounds, and reconnected with his passion for songwriting. “I found my way back to country when I moved here,” he adds. “Country is where my heart is.”

At the same time his band called it quits, he met his musical partner and future wife Noelle, who grew up playing piano and belting out Aretha Franklin songs. “I thought she was much better than the band I moved here with, and prettier too,” he laughs. “She had her own thing going on, but we started writing together, and I played with her when she’d perform her stuff. We decided to join forces and make it an official thing.” The pair embarked on a year long co-writing journey, and penned one song every week. “We were writing for other people, but we weren’t sure that some of these songs would have a home outside of us doing something with them,” he explains of the deeply personal tracks. “We wanted to do something different in the country world.” The Bohannons chose their five favorites, plus one more written to round out the tracklist, and created an album, 6:53, set for release in June.

Their band, Neon Moon, recently released “If I Knew,” a new single from their forthcoming record; the song, with its twang and swagger, firmly resides in the alt-country corner of the Americana realm, and that’s just how they like it. “Country fans feel a little disconnected from what’s on the radio today,” Josh says. “Our goal was to make something they could listen to and feel connected again to the things they used to love about listening to country music.” Adds Noelle, “This is only the beginning.”

One thought on “Interview: Neon Moon”