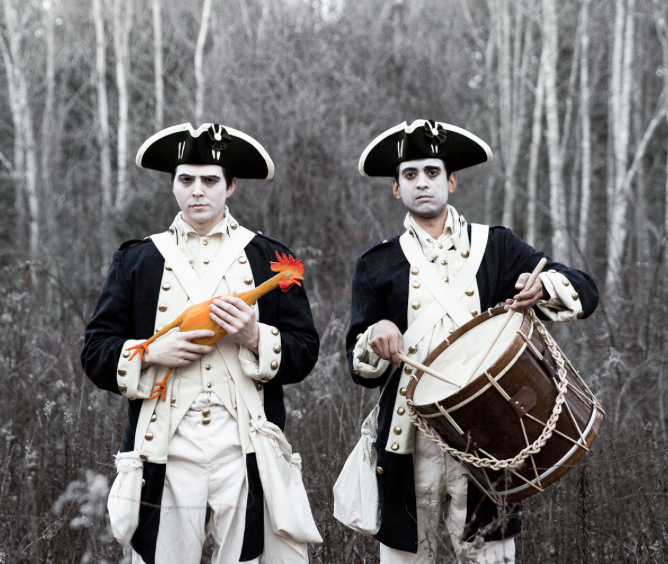 “We are who we are.  We’re weirdos, and we embrace that,” declares Josh Arnoudse of quirky Massachusetts-based indie folk rock duo You Won’t, who are on tour supporting their latest release, Revolutionaries.  I recently caught up with him about coming to the Music City to perform on May 17th at The High Watt:

Me: I think I remember seeing You Won’t open for Lucius a couple of years ago…

He: At the High Watt!

Me: Yes! And I remember you swinging a plastic accordion pipe around over your head.

He: That is correct.  We’re still swinging the pipe around.  It’s gotten longer actually, we expanded.

Me: In more ways than one!

You Won’t, who definitely make a lot of noise for only two people, are known for their ability to derive sounds from non-traditional instruments—and items-turned-instruments.  “We have all sorts of weird shit,” says Arnoudse.  “It was tricky in some ways to get it to come through in the recording process because we didn’t know the best way to record some of them. There was a lot of trial and error with all the weird instruments, trying find the best way to record them.  There didn’t seem to be a lot of shortcuts in the process.”

In fact, Arnoudse recalls that the Revolutionaries recording process took forever; “I mean, I had to order the new pipe from Australia,” he says with a laugh. “No, we were trying to evolve our sound in a lot of ways, but we were still recording everything ourselves, and there was a lot of trial and error in making it sound right.  We’re both perfectionists, which can be good in terms of getting the details right, but it can also be crippling at times; we’d get hung up on little things that probably weren’t worth getting hung up on.”  The pair decided to involve friends Jacob Goldman and Dan Molad, drummer for  indie pop band Lucius, to gain some perspective.  “Dan recorded a song with us and mixed a bunch of the record,” he adds.  “Having him, along with our friend Jake involved got us moving again.”

The album’s glorious cover art depicts the duo dressed in Revolutionary War gear, appropriate given their Massachusetts roots. “We grew up with that stuff everywhere.  It’s funny because as I got older, I just assumed everyone had the same intimate knowledge of the American Revolution that I did, since it was such a major part of our schooling, but gradually I discovered that that wasn’t the case,” Arnoudse says with a laugh. “There were always these Battle of Lexington reenactments around; when I was 16, my friend and I, trying to be troublemakers, got dressed up as British sympathizers, carried a Union Jack around, and demanded reinstitution of the British Crown.  The guys playing the British soldiers came by and saluted us.  It was pretty exciting at the time.  It’s all very nerdy.”

Revolutionaries is, at its heart, a reflection on the crumbling of youthful idealism in the face of the compromises and moral ambiguities of adulthood.  Captivatingly catchy album single, “Douchey”, is a nod to Arnoudse’s college nickname—“It was a running joke, and then that melody popped into my head.  We were trying to get our light-heartedness to come through on this album, so it worked,” he recalls.  “We’re really serious about what we do, but we don’t take ourselves too seriously.”

Purchase tickets to see You Won’t in Nashville: http://www.ticketweb.com/t3/sale/SaleEventDetail?dispatch=loadSelectionData&eventId=6522155&pl=mercylounge&REFID=wordpress

Can’t make it to the show on May 17th? Don’t fret! Check out the You Won’t tour schedule here: http://youwontmusic.com/tour