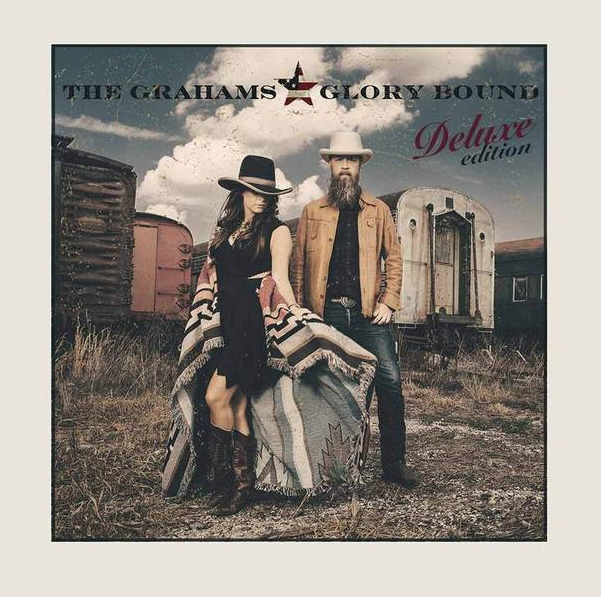 While I’ve been a fan of Americana music for quite some time, I was recently introduced to the work of Nashville-based husband-wife duo, The Grahams, who released a deluxe edition of their latest album, Glory Bound, on March 25th.  I became enamored the moment I heard the first and title track, “Glory Bound”, a witty, upbeat tune with lyrics as clever as they are relatable.  “I wish I hadn’t done the things I did when I was young/All the little tablets I melted on my tongue/All the stupid arguments/The banners that I hung/Lord I wish I’d never done the things I did when I was young”, sings Alyssa Graham about youthful regrets, which all of us have or are in the process of creating.  Even so, those indiscretions aren’t going to keep the singer’s train from being “glory bound.”  You also don’t even need to read the album credits to recognize the expertly-executed fiddle and signature voice of Sara Watkins or the iconic guitar playing of Sean Watkins, neo-grass outfit Nickel Creek’s sibling powerhouse.  The introspective “Broken Bottle (A. Escovedo)” reminds us that sometimes we get burned by the heat of beauty;  Austin-based producer and The Grahams’ compadre Davíd Garza along with songstress Suzanna Choffel  are featured on the deluxe version of “Mama”, a gospel-infused and touching tribute written  about Doug Graham’s late mother.  The album is stacked with sparkling sonic gems–choosing standouts in the bunch proves a difficult task, but ”The Wild One”, a mix of which the band released as a single (called the “Big Pink Mix”) puts the rest to shame; the use of organ touches with just the right amount of guitar coupled with Alyssa’s soulful vocals produce a bluesy folk song which rivals any of the greats from the 60s. Glory Bound is one of the best Americana albums I’ve heard in ages, and the deluxe edition is icing on the cake.   With heavy-hitting guest vocalists and musicians, a diverse roster of which includes Kenneth Pattengale from The Milk Carton Kids and John Fullbright accompanying the already superb musical force known as The Grahams, you can’t go wrong no matter which track the shuffle may choose. If you’re not already a fan, you soon will be.