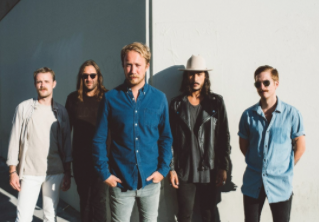 Misty Shrub, the debut EP from emerging band Bird Dog, will be released January 22nd via IAMSOUND Records. The lead single “The Ocean and the Sea” is available now and receiving early critical buzz—Indie Shuffle says it “…exudes the whole folk music vibe…before a refreshing transition midway through into pure rock n’ roll,” while Neon Gold says the song is “every bit as expansive as it sounds, playing out like a spellbinding cross between Local Natives, Grouplove, Iron & Wine.”

To support the release, the band will perform at this year’s CMJ Music Marathon for the first time, with more nationwide dates to be added soon.

Misty Shrub was produced by James McAlister (known for his work with Sufjan Stevens), mixed by The Shins’ Yuuki Matthews, and recorded in the band’s own studio, set up in a dilapidated house in Latigo Canyon in Malibu, California. Of the process, the band explains, “The room up in that house had this great, warm sound that we all really fell in love with and wanted to capture. The songwriting process was very collaborative. We all brought in bits and pieces of ideas we had gathered over the years and kind of just let them become what they are. People do so many great and terrible things, we love to write about those things and what its like to observe them.”