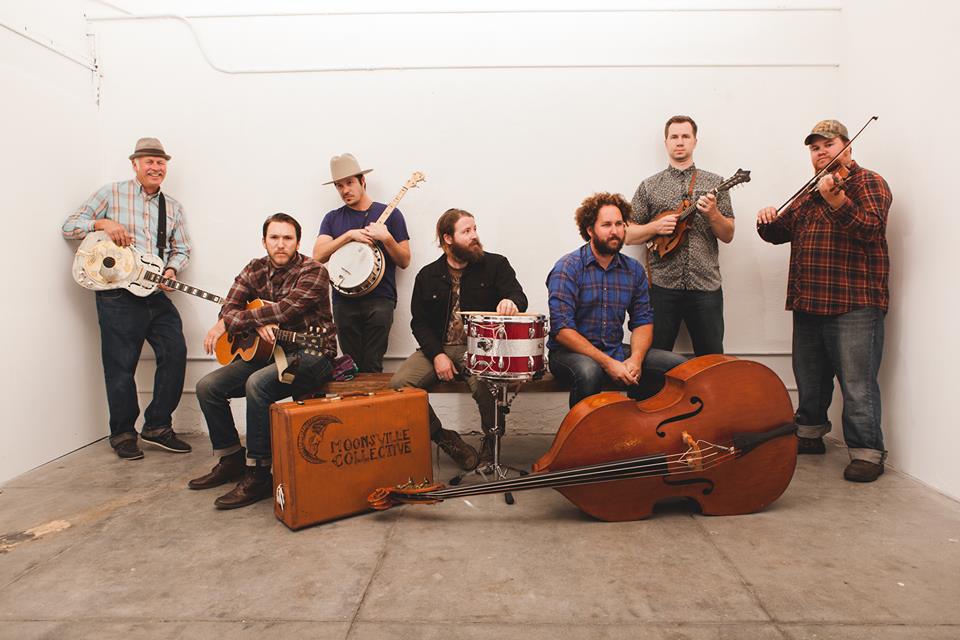 Hollywood.  Movie stars.  Red carpets.  Paparazzi. These are the images conjured when one mentions Los Angeles.  Hootenannies and old-time jug band music? Not so much.

Meet seven-piece Moonsville Collective, who have carved their own rootsy niche in the greater Los Angeles melting pot of a music scene: “When we first came to the old-time kind of music, Seth [Richardson, double bass] single-handedly crafted a small jug band/old-time/folk/country circle in our area.  He’d have these big parties and everyone would come with a guitar and sit in a circle and share tunes.  Out of that, a lot of our friends’ bands popped up, and we’d cross paths with other local bands like The Show Ponies and Dustbowl Revival, Eagle Rock Gospel Singers.  Now there’s a sustainable community for people making old-time Americana music, or however you want to spin it,” says Corey Adams, who shares vocal, guitar, and banjo duties with fellow bandmate Ryan Welch.

They were introduced to the style by “Dobro” Dan Richardson (Seth’s dad and fellow bandmate), who, with his brothers, has played jug band music in the hills of central California since the 60s: “We all played music growing up, and when we met Seth and Dan, we would take trips up there, and we were introduced to that old-time music, a lot of folk music.  That’s where we got injected with the disease, the sweet sickness.  That was the start for us, and once we got hit with the bug, we came back down to L.A. and started messing around with it ourselves, and it’s never really left our bones,” says Welch.

The band calls what they’ve created together “California Goodtime.” “‘California Goodtime’ came out of these, as Seth would call them, hootenannies; we’d go and just rage, playing these fun and fast songs so people could dance, at least dancing was the by-product anyway.  People would say ‘their parties are super fun,’ so we tipped our cap to the phrase ‘old-time’ and called it ‘goodtime,’ plus we’re from California and we’re really proud of that,” explains Adams, as Welch adds, “Over the last year or two, people have kind of mistaken what we do as bluegrass, but we’re not really a bluegrass band.  Now, when people ask what we play, we say ‘California Goodtime,’ making our own genre, and hoping it will catch on. We don’t really know what it means.”

Moonsville Collective has captured the essence of “California Goodtime” on their newest effort, Heavy Howl, which is due for release on October 30th via Rock Ridge Music.  “This record catches us at a point where we’re learning how to walk away from what we’ve been doing and take it forward.  I think a good indication of the direction we’re going in would be our song ‘Rolling In Paradise.’  We love the old-time, new country, jug band stuff, but we’re trying to take it even further and create a sound that reflects on where we’re from, Los Angeles; guys like Gram Parsons, all these really cool, creative guys’ brand of Americana, and blend it in with this west coast sound, reminiscent of The Band or The Grateful Dead, you know, which is the direction we’re trying to take our brand of old-time and Americana,” says Adams.  “A lot of bands get stuck in their sound, and they have to keep making albums that sound the same, but with us, we’re still in the process of discovering what our sound is.  On the album we have straight folk songs, a couple of string band songs, then a few more jam band kind of songs.  I think our hearts and spirits are moving towards creating that kind of groovy, heavier sound.  We’ve almost got our next album written and done.  It’s been a prolific year; a lot of our new songs are similar to ‘Rolling In Paradise.’ I don’t why it’s coming out that way; it’s like going through the jungle and cutting down weeds to figure out what the oasis is,” says Welch.

The chemistry between the band’s seven members is evident in the infectious music they make.  Moonsville is more than a collective, it’s a community. “We laugh together, we cry together, we pray together, we curse together, there’s an unparalleled camaraderie in our band,” says Adams.  Camaraderie is a must for this ensemble, especially since they are in it for the long haul.  “We’re not going anywhere,” confesses Welch.  “We’re on the marathon program. We have a lot to say and we’d love for people to take a listen.”