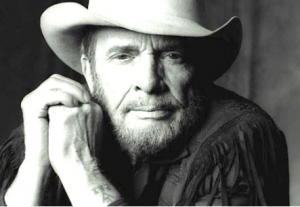 At 78 years of age, Merle Haggard is not slowing down. “My family won’t let me sink back in the chair,” he jokes. “They want me to be a young grandpa.”

The truth is that the legend has seen a thing or two in his day. With a career spanning from the early sixties to Django and Jimmie, his most recent release with Willie Nelson, Haggard has put 76 studio albums, 48 compilation albums, and 38 #1 singles on the shelves.

However, like most legends, Haggard refuses to rest comfortably on the strength of his achievements. “I’m more of a ‘now’ person,” Haggard joked when asked about how charting today compares to the success of his past. “What happened when I was younger is wonderful and all, and I’m very thankful for it, but I’m still young at heart. I’m still out here trying to do my best. It means something different now because we’re older.”

Even with the success of today (Django and Jimmie charted at #7 on the Billboard Top 200), there is no room to question the overwhelming success of Haggard’s past and the narrative attached to his success.

His story is that of the American dream.

Born in a converted boxcar in 1937, Haggard’s family was the textbook definition of working-class. Left with a single mother after his father passed away when Merle was 9, he found himself drawn towards rebellion and crime as a means of survival. This path would lead him down a wayward runaway life filled with juvenile detention centers, schools for troubled kids, and eventually, prison.

His interactions with several hopeless inmates sparked the desire for a better life. During his stay, Johnny Cash, who played at the prison where Merle was housed, also heavily influenced him.

His post-prison life was anything but controversy-free. Outspoken and clear about his beliefs, Haggard never held back his perspective. With the release of “Okie From Muskogee,” for example, his words became the rally cry against the hippies and those protesting the Vietnam War. In the documentary Lost Highway, Haggard clarifies, “I wonder what so-and-so would think about this.  I was driving on Interstate 40 and saw a sign that said ’19 miles to Muskogee.’ I saw the sign and my whole childhood flashed before my eyes.” He wondered what his father would have thought about the current events of the world. Expanding deeper in an episode of American Master, he continues: “That’s how I got into it with the hippies. I thought they were unqualified to judge America. I thought about them looking down their noses at something I cherished very much and it pissed me off. I thought, ‘You sons of bitches. You’ve never been restricted away from this great, wonderful country and yet, here you are in the streets bitching about things and protesting a war that they didn’t know any more about than I did.”

It was that outspoken nature that made Haggard unique and that now separates him from the current music scene he once helped build.

“I believe it is,” he confesses when asked about the resurgence of the gritty, Americana music scene, which is slowly replacing the glittery, polished Nashville of today.  “They record someone today then send him to a training school to teach him how to perform. I believe that is backwards. A true performer is going to know his craft before he ever goes into the studio. Artists need to know what they’re doing. They should have a plan and a hit song.”

“I’m a fan of Sturgill Simpson,” he continues. “We’ve had him out for a few gigs lately. We’re just thrilled with his music. The thing that we currently call modern country music has burned out its welcome. It is time for something else.”

Frankly, if Haggard thinks it is time for something else, there is really only one question left to be asked; who will be the champion of the working class when Merle finally allows himself the right to sink back in that chair?

[This interview, written by Joshua Hammond, first appeared on the website FOR THE COUNTRY RECORD. You can find the original post here.]