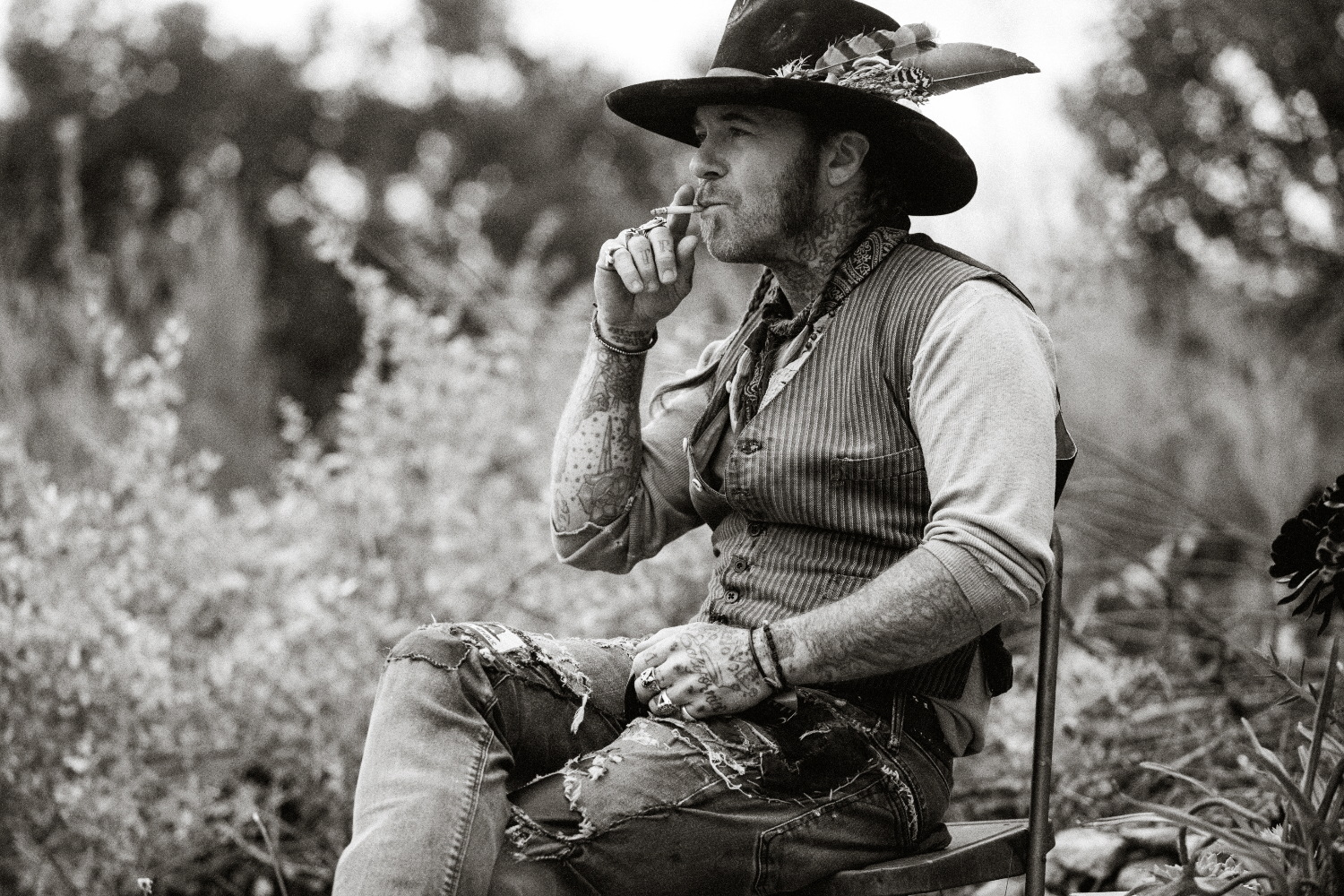 Charlie Overbey has done a lot of living; from making music about his many experiences to repurposing vintage beaver pelts to create his own brand of designer hats, he knows a thing or two about second chances. “Oh, man, I’ve lived 150 lifetimes,” he says with a laugh. “I’ve been to prison. I’ve lived in Europe. I’ve owned bars, I’ve worked on all sides of the music business.  I’ve been grateful and lucky to have known a lot of amazing people in this industry–the smart ones, the ones that I really look up to, all pretty much have the same perspective: we’re all just people struggling to make it day by day and be able to sleep at night with a clear conscience.”

In April, the native Californian (who refers to himself as the son of a British mother and an Arkansas hillbilly father) released Broken Arrow, a 10-song collection that debuted at number eight on the iTunes new music chart, which was written during his many lifetimes—songs that beautifully encapsulate the highest summits and deepest valleys of the human experience. “The record had been done for a little while and I’ve been pretty antsy to get it out, but you know, everyone behind the scenes advised me to push it,” he reveals. “I’m 50 now. I’ve been around been around a while. I’ve been doing this a long time and I’ve really learned that waiting is prosperous. We can hurry through and try to rush stuff. But if anything’s going to happen, it’s gonna happen anyway, and if it’s not going to happen, it just ain’t gonna happen,” he opines. “Waiting was good. We had a hell of a release party. It’s pretty safe to say that venue was like Cheech & Chong’s van,” he says with a laugh of the album’s 4/20 release date. “It was pretty spectacular.”

Broken Arrow isn’t only a deep record, it’s a deeply personal one. Overbey partnered with Grammy Award-winning producer Ted Hutt (Gaslight Anthem, Dropkick Murphys, Old Crow Medicine Show) who virtually changed the course of the record’s trajectory. “I went in expecting to make one record and came out with another,” he laughs. After coming off the road from a tour with Blackberry Smoke, Overbey entered the studio with new songs in the Southern rock vein; Hutt had a different idea. “He said, ‘You know Charlie, I think that we should make a record that speaks about your life and your experiences and your stories. I think that you should do all those songs that are hard for you to do because they’re painful, you know, the ones that you play when we’re just sitting around, the ones that you know said you were going to probably record once you were old enough. Charlie, you’re old enough make that record.’ And we did.”

The subject matter runs the gamut—from divorce, death, and overdose to joy and hope. “We tend to lose sight of what’s important and what’s not–little things like taking care of one another and making sure that we just have what we need, not what we want,” he says. “In this crazy wacky America that we’re living in, I think that people tend to get caught up in stuff and things. Having a good time is important, but at the same time sitting back and looking at the big picture and acknowledging that we’re supposed to feel things, and take some time to let ourselves feel things, that’s important too. A good song that takes you to a place–whether it be a place of joy or a place of sadness,” he adds. “Sometimes we’ve got to sit in uncomfortable places to get comfortable.” Broken Arrow features appearances from the likes of The Mastersons, Miranda Lee Richards, and Overbey’s longtime pal, Eddie Spaghetti from The Supersuckers, who contributed vocals to a song Overbey wrote about him, appropriately titled “The Ballad of Eddie Spaghetti,” about his battle with and subsequent victory over throat cancer. “That cancer thing is a real motherfucker,” says Overbey. “I wrote that song in six or seven minutes and put it away. Ted suggested we put it on the record. I called Eddie and I said, ‘Hey man, I wrote this song when you were going through that whole deal and now that you’ve come out on the other side of things and you’re clean from the cancer. I think it’s going to be a good thing to put it on this record, what do you think about coming in and singing on it? He had never heard the song, so he came in, we put it up on the speakers and he listened. He looked over at me and said, ‘Were you counting me out?’  And I said ‘No man! I knew you were gonna be just fine,’” he exclaims. “It was a really amazing experience to be able to do that with my friend and to rejoice, knowing that he’s good. It was just part of the magic of making this record.”

These lifetimes worth of experience have taught Overbey a lot, and left him with perspective, wisdom, and a sense of humor. “I’m still here,” he declares. “I’m just gonna keep doing what I do and hoping that people get it. This is a record that’s not intended for pop radio. it’s a record that’s intended to have longevity and to bring comfort,” he continues. “Walk with hope, people.”