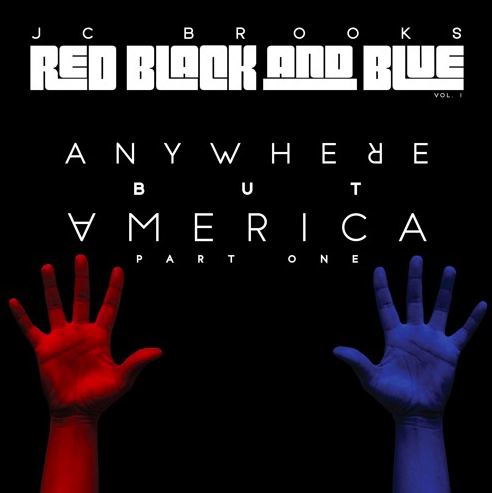 It’s been said that there’s no place like home, but what exactly is home? And, when you feel like you don’t belong, or can be eradicated or ejected from a place at any time, is that really home?

Chicago-based singer JB Brooks and his new project, the JC Brooks Band, explores this idea in his new single, “Anywhere But America, Part One,” a track from the band’s forthcoming EP Red, Black and Blue, Vol 1, set for release on Friday, April 13th.

“‘Anywhere But America, Part One’” was created to satisfy the need to return to our soul roots,” explains Brooks. “What was not known was that the song would be a scrupulous breakup letter to America that would stab any lover in the heart,” he continues. “Red Black & Blue, Vol 1 is an EP about the evergreen frustration of being gas-lit by someone who’s only slick enough to trick himself but not you.”

The song cleverly entangles lyrical ideas from Martin Luther King, Jr.’s “I Have a Dream” speech with lines from the “Star Spangled Banner” to create a witty villanelle expressing Black America’s disdain for the country’s actions of the past and present. “Anywhere But America, Part One,” with its organ-infused, gospel choir-laced, smokey Chicago blues, is a heart-wrenching lament. “You’ve been trying to get rid of me…so when you finally kill me, tell my mama, bury me anywhere but here,” wails Brooks, a sadness that cuts deeply, and seemingly without an end in sight.

[“Anywhere But America, Part One” will be available everywhere on March 2nd. JC Brooks Band and will celebrate the release with a free show at Woolworth on 5th in Nashville, TN on Saturday, March 3rd. Click HERE for details.]