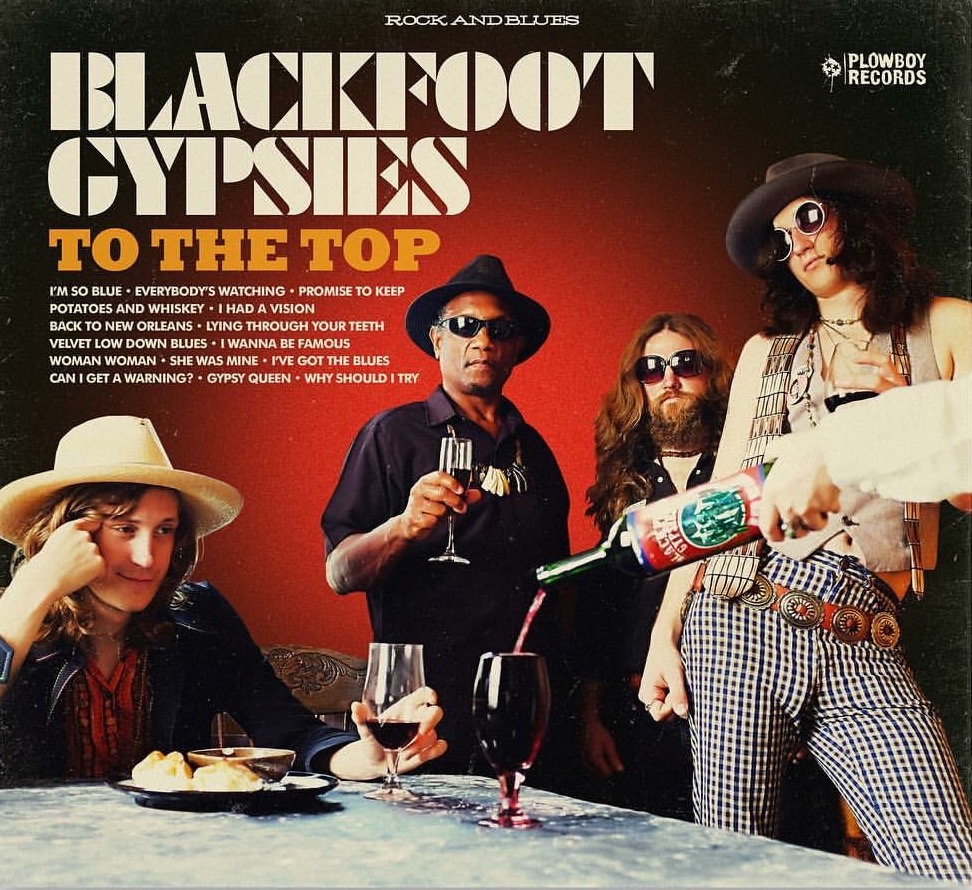 Sitting for a chat at Calypso Cafe in East Nashville with three of four members of blues rock outfit Blackfoot Gypsies is like being in the middle of a ping pong match or a comedy routine–one might gather that they have spent a lifetime together, yet the bulk of their musical journey began only a few short years ago. Initially a two-piece project comprised of vocalist Matthew Paige and drummer Zach Murphy, the pair completed the lineup around 2013 with bassist Dylan Whitlow and harmonica master Ollie Dogg.

“The Dogg and I were hitchhiking down Route 15, and we’d been playing juke joints every night—me on harmonica and him on bass—and we switched it around for an open mic night in Tallahassee,” Whitlow recalls of his adventures with his bandmate and fellow craps enthusiast. “We made our way to Nashville, split up when we got here, and met Zach and Matthew individually at a party.”  “We bonded over shrimp and grits,” interjects Paige. They decided to jam, and it was a perfect fit. “Dylan’s the wisecracker, he’s always got fun stuff to say. Zach’s the logistics man, he takes the crazy and makes it logical, and he’s also hilarious. Ollie Dogg is good at sitting in the front seat and watching out for cops, and he’s a great hype man,” explains Paige. “Chicks love the Dogg.”

Four years later, they have a few releases under their collective belt, have toured the world together, and the foursome is, as Murphy says, “gearing up to do more hustling” with the release of To The Top, their new LP, out April 14th via Plowboy Records. Recorded at Electric Kite Studio in Madison, Tennessee, the 15-song album features fixtures from the Nashville scene like Margo Price and Steelism’s Spencer Cullum, Jr. “It was like inviting your friends over, like ‘we’re gonna be here all day, come on by!’” laughs Paige. “Everything was taken care of—there was food, drinks, so much support from our friends and our label. All we had to do was have a good time and focus on recording.” Their sound is reminiscent of blues-heavy early Rolling Stones with an extra helping of country-fried grit, and their swamp-infused raucous energy virtually explodes from the speakers.

“We’ve been playing these songs live for a very long time,” explains Whitlow. “We thought they were all settled, but they continued to change and morph when we recorded them.” “Then, when we get onstage, the song just becomes a guideline, and we can try some new shit every time, mix it up in the middle for our sanity and the crowd’s,” adds Paige. If you’re in Nashville on Friday, April 14th, you can catch Blackfoot Gypsies’ release show at Little Harpeth Brewing, where players from the recording process will join the band as they perform To The Top from cover to cover. “There will be cartwheels, flips, and a lot of beer,” Paige promises. “Then we will tour. A lot.”

Purchase To The Top, set for release on April 14th via Plowboy Records: https://itunes.apple.com/us/album/to-the-top/id1214639993

One thought on “Interview: Blackfoot Gypsies”