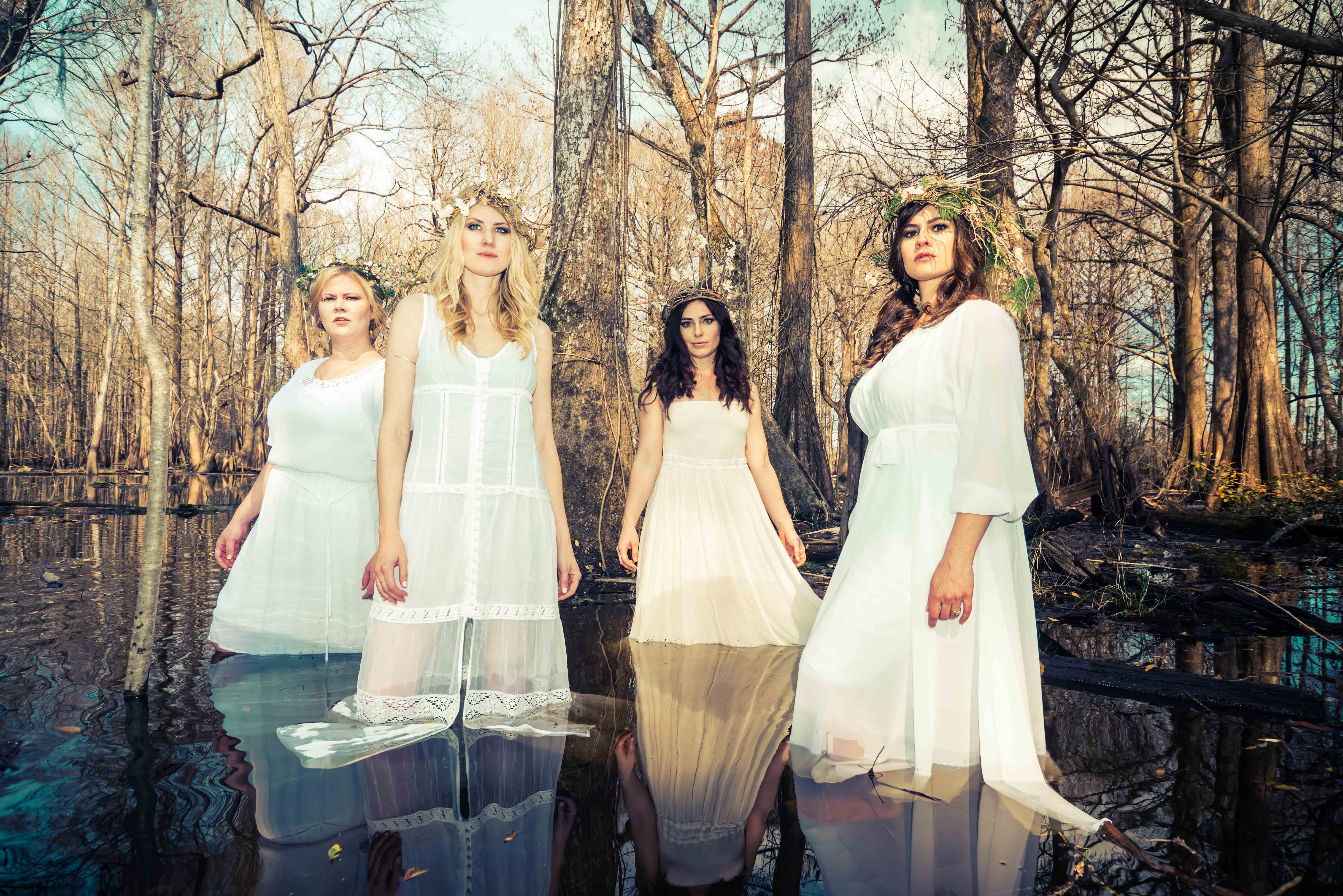 Art, particularly music, is a manifestation of creativity birthed from artists’ environments, their influences, their familial ties, and life experiences; it’s no surprise then, that up-and-coming roots outfit The Krickets, born on the wetlands of the Gulf Coast, have distilled the string-centric sounds of their swampy surroundings into a bewitching debut album, Spanish Moss Sirens, out earlier this year.

“We live in this swampy, old Florida kind of place. It’s not a resort-y area where everything’s perfect; it’s all undergrowth and palmettos,” explains band fiddle player and co-vocalist Lauren Spring. “We’re not very fancy, and we’re far from slick in any way, so we decided to go with what we are good at, and that’s a lot of folk harmony. We can also pull off looking like dirty swamp people really well,” she laughs. It’s true—from their chilling three-part harmony, to their band photos taken in alligator-infested waters (Spring assures me it was cold and the gators were slow-moving that day), these four heroines are the embodiment of everything Spanish Moss sirens (or as we Southern folks say, “SIGH-reens”) should be.

The band was born from necessity, when Spring was asked to provide the music for a local breast cancer benefit. “I couldn’t carry a 40-song gig by myself, so I called Melissa, bless her heart, who I knew had been gigging around town, and she played with me,” she says. “We had so much fun for the next couple of years, and we invited Emily to join us. Once we heard that three-part harmony, you can’t help the chills. We’re all super goofy and very inappropriate, and we got along really well. Katrina, our bass player, grew up in Mobile, and she’s probably the craziest one of all of us,” Spring jokes. “She rounded out our sound.”

“Eventually, we needed to make some gas money, so we made a video to raise funds to make a record, and it got real big, real fast,” Spring says of their album-making process. “Melissa’s dad had recently passed away; he’d raised her around those Musicle Shoals Sound session players, he even had his ashes scattered in Muscle Shoals. She begged us to go to there to make the record, like an homage to her dad. We contacted a few studios, but nothing felt right until we found John Paul White’s Single Lock studio, behind his beautiful Victorian house in Florence.” The Krickets worked with Alabama Shakes band member and Single Lock Records co-owner  Ben Tanner to produce the album. “Ben was the coolest; he wanted us not to lose our sound in over-production, to keep in the mistakes, and not hire session players,” she recalls. “We made the music.”

The Krickets’ influences decorate the sparkling gem of an album—from the heat of the swamplands and the natural beauty of their surroundings to their dearly departed fathers who introduced them to the music they loved, it’s all there. “We’re staring at the Gulf of Mexico, and the sunsets here will melt your face off, they’re so beautiful,” says Spring wistfully. “There are so many traditions here, crazy history—yellow fever epidemics, ghost ships. There are lots of references to family in our music; there’s a lullaby to Emily’s baby, she was pregnant while we were making the record, and there’s a song for Melissa’s dad. On the back of Katrina’s bass is a giant green-eyed monster, it looks like the monster is pulling back curtains to look out of the bass and we see it the entire time we perform; her dad was an artist before he passed away, and he drew that for her to inspire her to let the beast within her come out when she’s playing.”

This year, The Krickets have made quite an impression on the Americana world with their infectious brand of swamp-folk, winning Folk Artists of the Year at the IMEA awards, and an award at the Independent Music Awards this fall. “None of us had any idea that what we created would blow up like it has, and we’re so grateful,” she adds. “We’re trying to figure out how to handle the attention we’re getting, and we plan to broaden where we’re playing, theaters, listening rooms, and festivals in new markets. We’re going to be scaring a town near you soon.”