Album Review: Austin Lucas – Between The Moon And The Midwest 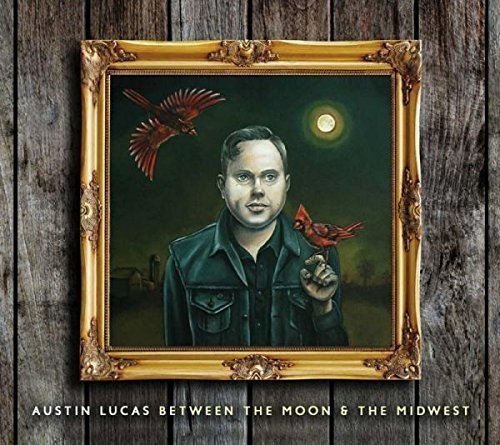 For a while now, Austin Lucas has been one of the few artists carrying the classic country torch who has been able to keep it current and relevant. Usually decked out in a punk band’s t-shirt that he digs, sneakers, and wielding a guitar, Lucas tells stories with a strong country drawl acquired straight from Indiana. The sincerity does not just come from his unwillingness to dress like a period-correct re-enactor, it comes from his stories of real life in the current world set to country music–the product is simultaneously anachronistic and fresh.

Between The Moon And The Midwest, a reflection of heartbreak brought on by a dying marriage, musical roadblocks, and achieving sobriety,  sat on a shelf for nearly two years–until, appropriately enough, finding its home on Last Chance Records.

Produced and recorded with Joey Kneiser (who not only was the front man of Glossary, but who also released my favorite album of 2015, The Wildness) Between The Moon And The Midwest is sonically brilliant. The addition of experimental sounds to the mix is a natural progression of song from idea to complete picture, rather than  pompous self-indulgence.

From the opening notes of “Unbroken Hearts” to the final notes of “Midnight”, the album flows beautifully as one cohesive idea; the same refrains are revisited throughout, like a melodic character journey from song to song, moment to moment.

While there are some standout tracks, it seems odd to highlight them when Between The Moon And The Midwest is a complete work in this world of single collections; however, if I was releasing a radio-friendly song to get folks addicted, the infectious “Ain’t We Free” would be that gateway drug, as it embodies so many of the album’s themes.

The record hits the shelves on May 27th, so head over to lastchancerecords.com to pre-order, or look for it at your favorite music store. Between The Moon And The Midwest is a must-have for the first half of 2016.