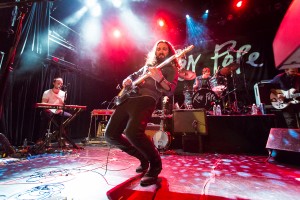 Entrenched in the celebrated East Village in New York, a sold-out Irving Plaza crowd was amped for the CD release show of Ron Pope & The Nighthawks. As I walked in during the conclusion of TRUETT’s opening slot, the crowd was already restless and rowdy.

Anticipation would additionally build at an accelerated rate during the set of the charming direct support, Jonathan Tyler. Good-humored and wild, someone in the crowd lightheartedly screamed “I love you man” following the conclusion of his first song of the evening. Tyler snickered and responded, “You don’t even know me man, but first impressions go a long way with me.” That vibe set the tone for the evening. In partnership, the crowd and band worked their way through a boisterous and exciting set. With his alt-country voice and rock star demeanor, Tyler commanded the room’s attention, even as a stranger to most.

Sporting a haggard leather jacket over a vintage biker rally t-shirt and tight faded jeans, Tyler’s thrift store look was tied together flawlessly by the tattered strips of fabric that dangled from his guitar strap. His dark, slicked-back hair would fall inconspicuously into his face, resting somewhere between his slanted, sarcastic smile and jawline during each song. His look corresponded with his sound, which hovered between Whiskeytown-rooted love songs and repurposed, antiqued blues songs. With an acoustic guitar hanging from his shoulders and a harmonica secured around his head, Tyler possessed the personality of Bob Dylan at times, even going so far as to cover “Girl From North Country” during the evening.

Although there were numerous remarkable flashes throughout Tyler’s set, the crowd energy peaked when Nikki Lane joined the band to sing “To Love Is To Fly.”

Within moments he was substituted with Ron Pope and an assembly of players being called The Nighthawks. Roughly 24 hours after dropping their self-titled record, the crew gathered in Manhattan to celebrate the release. Wielding blended vocals and a barrage of brass instruments, the band started with the lively “Hell Or High Water.” The crowd responded accordingly, uniting with the band for the “heys!” Alternating between new songs and older jams, Pope and company piloted a nearly two-hour set cohesively and without folly. Each of the members of the Nighthawks seemed built to play with the others while they shared a stage. Feeding off each other’s energy until the band was in a collectively feverish frenzy, the group whirled around the stage in unexpected unison of pandemonium and articulated commotion.

Throughout the night, Pope meandered through an assortment of distinctive sounds. At times the band possessed Tom Petty qualities. “If You Want Me” in particular inched similarly to “Last Dance With Mary Jane”, mostly due to the usage of poignant pianos and organs, fastened to driving guitars and percussion. However, at other points throughout the evening, mostly when Nighthawks’ vocals blended with Pope’s, the band took on more of an Alabama persona (if Alabama were covering songs written by Waylon, Willie, or Merle).

Regardless of the musical makeup of the moment, the crowd responded to the man of the evening. Throughout the show’s entirety, the guys in attendance were nodding their heads rhythmically, ladies drunkenly laughed and danced as everyone in attendance sung along with the set list transforming Irving Plaza from a music venue to a church choir of country music.