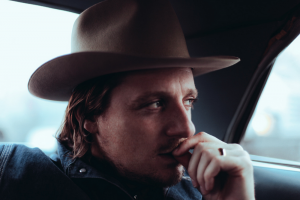 To say that Sturgill Simpson is the “long come to Jesus” of country music isn’t hyperbole, PR spin, or folklore. In fact, there is really no other way to explain Simpson than as “the no-bullshit savior of the Nashville sound.” A plain and rather unimpressive man in stature, sporting a common white shirt and jeans, Simpson barely acknowledged the crowd during his 23 song set at the historic Beacon Theater in New York. He wasn’t there for conversation and his live show wasn’t surrounded by glitz and flash.

Simpson isn’t a movie prop, a paper angel, or the product of a stylist and record label marketing plan. Hell, if someone asked me, I’d swear that Simpson was sent here from the 1970s.

Although his career is fairly simple when compared to the industry norm, there is nothing half-assed about what Simpson is doing. With a modest four thousand dollars, he recorded his second album. With meager album sales and a blue-collar work ethic that stems back to his career in the Navy and his time at Union Pacific, he worked his way from open mics and local gigs to sharing the stage with Willie and Merle and playing the Grand Ole Opry.

The evening I spent with him in New York was no different. The stage was void of the commonplace tools in today’s music—no flashy video screens projecting HD visions behind the band, no props, no bells or whistles; frankly there was no need for them. Simpson, and the players standing behind him, are there to remind you that songs themselves are intended to entertain. Watching as the Beacon Theatre, a somewhat upscale and classy venue in the heart of one of Manhattan’s richest areas, was transformed into a gathering of country boys hooting and hollering as though they’d wandered into their favorite honky-tonk on Music Row proved to me that he could do exactly that.

Done properly, country music stirs emotion. Anyone who has ever sat in the pews at the mother church of country music can confirm this. In its truest form, country is rowdy.

It is laced with melancholy shattered hearts, told from the porches of broken homes, and explained away by good ‘ole boys and girls who drink their feelings away. It is a celebration of a heritage, a culture and a life that many never fully live. Johnny Cash, Merle Haggard, Waylon Jennings, and Willie Nelson all wandered through the Nashville scene with an outlandish strut and an outlaw sound. They established that rules are made to be bent (if not broken), the law was suggestive at best, and music was intended to be raw, gritty and played for the people who love it.

Country music was a community until suddenly, and without warning, the doors were locked on the outlaws. Nashville became the home of crossover pop stars and the genre became over-polished and cute.

“We made our new record in New York, because Nashville just doesn’t get it anymore,” Simpson confessed during one of the rare instances he addressed the crowd.

Almost overnight, country became a guilty pleasure rather than a heritage flag to wave with pride. Set changes mattered more than key changes as a series of replaceable marketing tools were selected, handed songs, taught to play them, and ushered onto the stage.

Not once during his nearly 90 minute set did Sturgill Simpson offer any excuses to the crowd for being country. In fact, Simpson didn’t say much of anything, letting his bold and seasoned band, and the music pouring from their fingertips, speak for itself.

We all left the building better for having seen him do so.