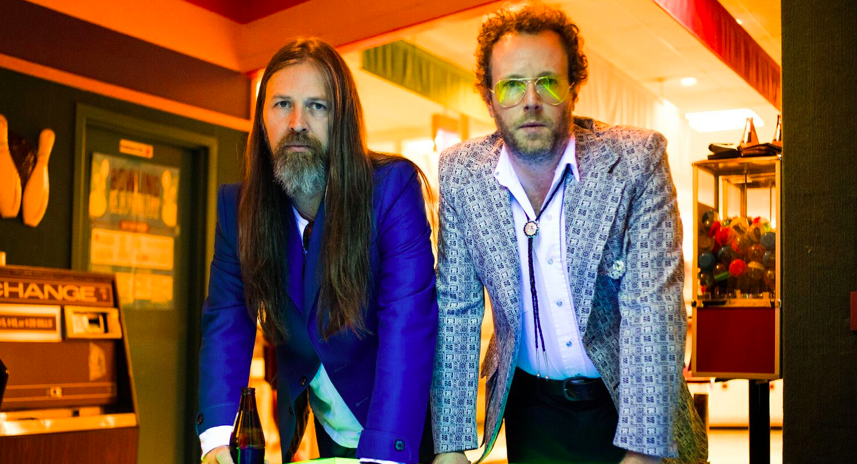 “Tim hates the idea.  And I agree.  Country Roots is a terrible title,” laughs Whiskey Wolves of the West band member Leroy Powell of their forthcoming album, out March 2nd via Rock Ridge Music.  “But so is the name Whiskey Wolves of the West.  It’s completely ridiculous.  That’s what makes me love it so much.  Combined with the futurism of the cover art, it really makes an incredible statement about the future of country music and the giant slog of shit that we’re having to wade through in order to make music like this in the world today,” he declares. “The irony really rings true for us.  I love the song.  Best opening line of any country song ever.”

Today, the band unleashes the title track, a boozy Johnny Paycheck-esque twanger that makes you want to climb up in an 18-wheeler cab and crank up the old CB radio. “Tim had this joke song he was writing about an Australian cowboy singer named Charlie Pound. I think ‘F F F F Fishing Hole’ was the name of it. It was pretty hilarious but totally inappropriate for any audience beyond truck driver diners or 3 a.m. tour bus jam sessions,” says Powell. “I remember the first lines being so brilliant though, and Tim and I started from there and wrote a whole new song about destructively drinking yourself into a coma.” “Leroy has it right here,” adds bandmate Tim Jones. “My grandfather was a teetotaling Church of Christ song leader in central Kentucky.  His father was a moonshiner.  In the Church of Christ (non-instrumental), you’re either in the church (their church) or a lost sinner.  I love placing the dichotomy of celebrating your roots and heritage with the metaphor of imbibing,” he continues. “It is a tradition for some in the same way that music is.  And Leroy wrote most of the chorus in a hotel room in Chicago, so I loved the thought of the country guy working in the big city and rebelling by having a little sip when the boss isn’t watching.”

Everything about this song, which begins with a hearty laugh and a countdown, ensures that “Country Roots,” and probably every other song on the album, is sure to be an instant classic—a fact which is shored up by the snazziest album art we’ve seen around here in a long time. “I don’t like title tracks, but Leroy had the concept of all these roots coming up to form some wolves and us intertwined in some sort of tree,” says bandmate Tim Jones. “I told him that sounded like what a 4th grader would do after eating too many Lunchables, but luckily Dean Tomasek, our artist (and sometimes co-writer and bass player), kicks so much ass that he made it all look like psilocybin futuristic land of Galaga meets the Old West.”