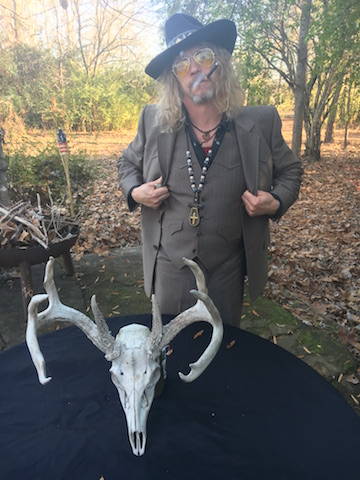 Mississippi-bred Southern roots preservationist Jimbo Mathus has produced a mammoth amount of work—already a veteran of several bands by the early 1990s, he formed the incomparable period jazz/swing revival outfit Squirrel Nut Zippers in 1993. Since the Zippers’ demise, Mathus has seemingly flown under the radar. However, as my mama says, “truth be told”, he’s been busier than ever—between a Grammy-winning collaboration with bluesman Buddy Guy and producing for hundreds of other artists, he’s funneled his wild creativity into cranking out a substantial solo catalog.

“The theme of my whole career has been restoring, reinventing, and reinvigorating Southern roots music.  I’ve taken things back to their roots in every concoction I’ve done, including  what I did with Squirrel Nut Zippers,” he explains.  “That stuff went back to Stephen Foster, early vaudeville, and Tin Pan Alley.  On all of my solo work, you’ll hear that same combo of honky tonk, blues, and gospel.  It’s sort of like ancestor worship on my part.”

Mathus credits an insatiable curiosity and a fascination with the past for his unique style.  “My first memories are of me digging around in my great-grandmother’s closet and finding an old shoebox of postcards and mementos.  I wanted to know how everything ‘happened’.  I would take a band like the Rolling Stones and go back and back and back to find where the sound originated,” he recalls.  “More succinctly, I guess I was just born that way.”

He also is fascinated by the esoteric nature of Southern music, a theme consistently reflected and revisited on his albums.  “Music, spirituality, and religion go hand-in-hand, that’s what makes Southern music so great—there was always fine line between “devil music” and singing songs for the Lord.  That’s something I’ve fleshed out over time, the philosophical side of music, the social aspect aspect of music.  It’s a three-dimensional object; music is one side, but so much is attached to it, like memories, family, emotions,” says Mathus.  “I also like the hoodoo aspect of religion, because, much like my music, it’s a mishmash—making something new out of disparate elements, mixing it up into something that effects people, controls people, frightens people, and transforms people.”

Always in the creative process, Mathus will release his new record, Band Of Storms, out via his label, Big Legal Mess Records, on May 6th.  True to form, Band Of Storms brims with country punk, swampy blues, honky tonk, and even an Appalachian-style string-tastic foot-stomper, “Catahoula.”  “I’ve never been a city dweller, I’ve always lived in rural areas.  The town I live in now has about, oh, 100 people in it.  Folks drop off strays around here because there’s no animal control.  My wife and I were walking one day on this gravel road, and this Catahoula came busting out of the bushes and followed us home. They’re half Spanish Greyhound and half Native American canine.  He was scared of his own shadow, and probably didn’t make a good hunting dog, which is likely why he got dropped off,” he recalls.  “Songs just kind of pop out of my brain, and I realized there were so many words that rhymed with Catahoula! I thought it was a good folk tale to tell.”

Mathus doesn’t plan on slowing down anytime soon; this year marks the 20th anniversary of the release of Squirrel Nut Zippers’ breakout album Hot.  This summer, The Zippers are back—news which made this writer squeal out loud.  ”We’re not getting back together just for a reunion, we’re getting back together to stay.  I’m putting together an amazing band; we’ll be doing the classics, and then we’ll probably make new material.  The hiatus was fine, and I’ve done a lot of work on my own, but I’m ready to resume the journey.”