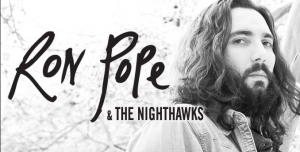 Even though he’s called New York home for over a decade, you don’t have to rifle too far into Ron Pope’s music to determine that the man has copious amounts of southern heritage running through his veins. With a classic outlaw-country sound embedded in the anti-Nashville scene in the 1960 and 1970s, Pope sticks to the common rambler themes of consumption, self-medication, and the difficulties of life.

His life and his music have been on his terms. Period. He’s never been the artifact of label achievement and has plotted his career in a ferociously self-governing manner. That unbending method has worked for Pope, who has tallied over 570 million combined streams on Pandora and YouTube.

Honestly, he is the American dream.

However, Pope isn’t channeling the musical ghosts of Merle Haggard and Waylon Jennings due to a new development in the “scene.” He isn’t being trendy. His songs are simply a narrative of the life he’s lived; his life has been tough, so that’s what his music reflects.

He was “born in the dust and raised in the dirt”…as his drum-propelled and guitar-laced, “Southern Cross” explains. A song about finding a better half during troubled and rowdy years, the southern jam serves as an indirect and informal thank you note from a wandering soul to his compass. Coupled with “Ain’t No Angel”, Pope’s Tom Petty-esque “Won’t Back Down” swagger pushes him all in, with middle fingers in the air and an unapologetic approach to life.

Pope makes sure to show his diversity and flexibility as a songwriter through the silkier “Hotel Room” and “Leave You Behind.” With blended vocals and heartbreakingly-detailed storytelling, Pope proves he can hang with the crooners between the dirt road jams. The result is a beautifully unmatched song, nestled in a batch of fantastic tracks.

A black sheep from beginning to end, Ron Pope & The Nighthawks will unapologetically clasp any rebel, pariah, or uneasy heart with a white-knuckled grip. More impressively though, is Pope’s ability to charm the good souls with an honesty that can’t be postured, making this album the “real deal” that sets the bar high for Americana in 2016.