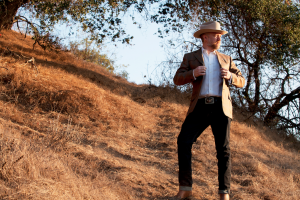 Mother Church Pew recently caught up with Darius Hobert of DARIUSTX to discuss the music in film, the Texas Revolution, and his Godmother Erline.

Find the interview below coupled with an exclusive premiere of the infectiously catchy “Godmother Erline’s Kitchen.”

Mother Church Pew: You’ve had a myriad of your songs turn up in film and television. With radio tightening its scope on who they’re willing to support, do you feel that television, film, and advertising have become the new mass media outlet for exposure in music?
Darius Hobert of DARIUSTX: That’s a great question.  Since the digital revolution and the demise of the majors, it’s like the Wild West out here.  Since the new way that music is being  commodified (read: devalued) nobody really knows where music production is headed, how anybody will make money now, or whether or not it’s even a viable career path.
I think it’s all led to a lot of really interesting thinking about what the new model is for creative pursuits, but tragically has also lead to a lot of talented yet disenfranchised creative types that have had to pack it in because the old music business model just is no longer sustainable.  Touring is down, record sales are basically nonexistent, radio spins are useless against the streaming machine, so where do you go to support your dangerous but vital music-making habit?
Twenty-five years ago you would have not been caught dead licensing your music for an ad.  When Revolution #9 was placed in that Nike ad, the streets ran red with musicians crying blood and gnashing their teeth.  These days you’re considered fortunate to get placed in a Dr. Scholl’s ad that runs on Lifetime at 4:30am.
I could go on and on ad nauseam (and have) about the past and the future of music as a career, but it’s ending up looking more like the patronage model; however instead of 18th century Austrian dukes, it’s an ad agency or media company.  I’m one of the lucky ones to be able to make a good living writing and playing music, but for every album I put out, and every great film I get to score, there are a number of 4:30am Dr. Scholl’s ads running with my music in them.
The good news is that new content is being created constantly for a ton of new portals (like streaming, etc.) and that means there’s more need for licensed and custom music.  The bad news is that because there are so many new opportunities, it attracts new creators who are willing to work for nada, and the overall budgets are plummeting.  I have my doubts about this current business model being sustainable for new artists and musicians, but so far there seems to be more room for everybody to get in where they fit in.
I’m incredibly fortunate, but also have a pretty wide-ranging skill set.  I can write in a gaggle of genres for film, tv, and new media, write opera and chamber works, produce hiphop records, develop pop/rock acts, and still be gifted with the extra time to put out an Americana album just because I want to.  It seems like the new process involves being able to do a lot of different things, and relying heavily on placements and licensing in all kinds of current media.
So yes, that’s a long-winded way of saying that not only is music placed in film, tv and new media important, it’s absolutely vital to the current crop of musicians. Sorry for blathering on and on – I love to talk about this stuff – if you’d like to continue the convo, hit me up on FB or Twitter: @dariustx!
MCP: Tell me about the album title, The Angels of Goliad. What was the inspiration in choosing this? Where does it come from?
DTX: The Angel of Goliad was a notable, legendary woman from the Texas revolution during the early part of the 19th century.  Apparently, this woman saved multiple Texans from slaughter on a number of occasions, most notably at the battle of Goliad, which was really more of just a mass execution.  Most folks are fairly sure that she was a mistress of a Mexican general, but stories differ.
Since this album relies much more heavily on my Texas and Louisiana roots, I wanted to make sure that the album name fit the obvious Texiana of the music.  And since the angelic voices of Nicole Britton and Caroline Wilson are all over the record I thought it was fitting, you dig?  I called it “dariustx VERSUS the angels of goliad’ because a lot of the lyrics deal with being offered redemption and wrestling with acceptance. Plus #DTXvTAG makes a mighty fine hashtag.

MCP: Tell me about the track we will be premiering “Godmother Erline’s Kitchen”. What is it about?

DTX: One of my favorite people in the whole world is my Godmother Erline in Lake Charles, Louisiana.  She’s 86 years old and a haughty coonazz Cajun.  She makes stellar coffee, tells family-friendly dirty jokes, and loves to eat Cajun food as much as I do.
This song is the 3rd chapter of this young, lonely, angst-ridden girl character I keep writing about for some reason.  She tries to escape what she thinks is a totally boring existence, but realizes she misses nearly all of it, but especially Godmother Erline’s little kitchen in Lake Charles (which really is a kickass place to set a spell – you all should go see Erline).
The song “Lonely Days” from an earlier dariustx album “Revelator and the Twilight” is another chapter in this fictional heroine’s life, but in that song she lives in Kansas, not Louisiana.  You’ll have to listen to the rest of my back catalog to figure out the 1st time she appears.
Find the Exclusive Premiere of”Godmother Erline’s Kitchen here:
Share on Social Media
twitterfacebook